This is no news for owners of Super Smash Bros. for 3DS, but this is our first look at the main villain of the Legend of Zelda series on the Wii U version of the title.
Ganondorf has always been one of gaming’s favorite villains and is no surprise that Nintendo has once again put him on the roster of their all-star brawler. 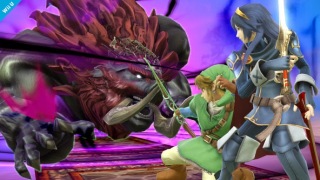 Nintendo has announced today through the official Smash Bros. Webpage the return of the evil wizard, but it’s noteworthy that they consider this to be a “Secret” character, even though we’ve seen him on previous entries of the series, plus on the 3DS version.
It’s nice to see Nintendo focusing more on the Wii U version now that the game is out on the 3DS, we’re sure to see more announcements like this in the future.
Source: http://www.smashbros.com/us/characters/secret07.html