The movie is about a distopian future where people pass most of their lives on a virtual reality software called “The Oasis”. When the creator, James Hallyday, dies, he leaves behind an easter egg hunt to see who’ll have control over The Oasis.

The story centers around a young man named Wade Watts. He, along some friends he meets on the way, will try to save the Oasis from the evil clutches of a corporation named IOI, who want to take control over the Oasis for their own benefit.

We won’t go into any more details of the story, to avoid giving spoilers.

Having previously read the book, I’m glad to say the movie manages to capture the essence of the book well enough, even if it made some pretty big changes to accomodate into a movie. Even changing some of the easter eggs and challenges. I don’t think better or worse of the movie based on this fact, but I wanted to point it out in case you’ve read the book yourself.

The movie is very action-oriented and visual. It has a fast pace and it doesn’t really stop in its tracks. It makes it for a fun ride. The pace is a stark contrast from the book, where I did feel it could take a little too long in some areas.

However, it does result in some scenes having a little bit too much narration, common problem in book adaptations. But it’s a sacrifice made in the name of getting to the action.

Interestigly, I found some of the side characters much more interesting than Wade/Parzival himself. Namely a character known within the Oasis as Art3mis, is the most fun and interesting character from the whole movie.

Steven Spielberg is always great at making character interactions feel genuine and human, and this movie is no exception. Actually, I’d say that interactions they’ve added are what makes the movie most enjoyable.

The movie itself is mostly computer generated, with only a handful of scenes with live action actors.  I don’t think I noticed a scene without any kind of CG. It doesn’t suffer for it, however, given it takes place within a virtual world, it looks like you’d expect it to look.

It has a lot of pop culture references, and I do mean dozens upon dozens. Movies, video games, music, it’s all here. Some of them even take center stage in the story, as they’re part of the clues left by Halliway in the easter egg hunt.

Ready Player One is a fun popcorn flick that I’d recommend for those into pop culture. I had a good time watching it with my friends, and it did open some discussion about the future and technology. But if you’re expecting some heavy themes based on Spielberg’s recent films, be warned this is a very different kind of movie. 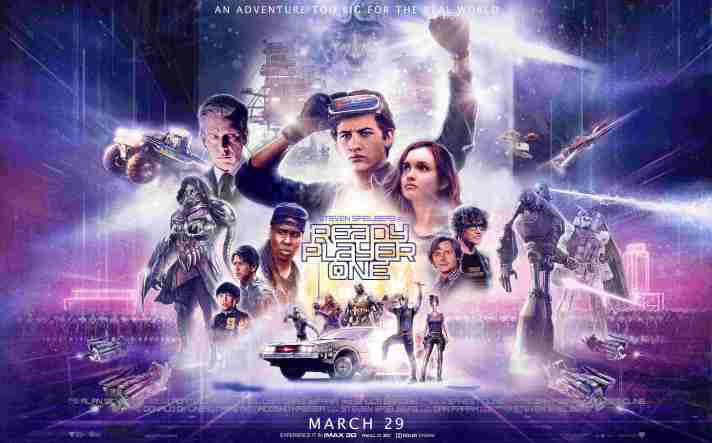 So, have you seen this movie? Did you read the book? Let us know what you think of Ready Player One in the comments bellow, or on our social media!

No compensation of any kind was given directly or indirectly for this review.