What does Nintendo have prepared for Project NX?

Project NX is the latest news on upcoming systems from Nintendo, but we’re yet to know, will it be a home console? a handheld console? a bit of both? We’ll evaluate some aspects to try to find out.
Nintendo’s Stance.
It’s important to first point out that Nintendo is interested in bringing their IPs to smartphones and other third party devices and that President Satoru Iwata brought up Project NX on a press conference around this idea. So it might be no stretch to think it’ll be related to some extent to this idea.
A Home Console, a Handheld, Both?
During the press conference, we saw an image of how third party systems will work alongside Nintendo hardware to bring the full experience that Nintendo is going to push in the upcoming years and we can see that both the 3DS and the Wii U appear alongside Project NX, so it wouldn’t be a stretch to think that it’s actually something entirely new to Nintendo in that it will have elements of both the Home Console and the Handheld. 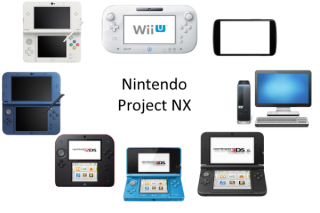 So if it’s a hybrid, how would it leave room for either the 3DS or the Wii U?
Here comes the interesting part, if it’s a hybrid, it will not have all the 3DS exclusive games, but instead work similar to the PlayStation Vita in that you can play on the device games bought for your Home Console, in this case the Wii U, like a full fledged Wii U gamepad.
The thing is, it’s been speculated for years now that the Wii U Gamepad was an idea of a handheld and a home console working together as a platform, but opted to make it a controller as they weren’t ready to release such a device yet.
But lately we’ve seen lots of changes on this. We had a surprising amount of compatibility between the 3DS and Wii U on Super Smash Bros. Both having the same gameplay and character roster, and not to forget the 3DS is a controller option for the Wii U version of the game.
Another interesting concept is cross-buy, the latest example being Mario vs Donkey Kong: Tipping Stars, if you buy the game on either system, you get a download code for the other version for free. If this is a sign of what’s to come, we might be seeing a new era where the same game is released for both the handheld and the home console.
Let us know what you think Project NX will be like in the comment section bellow.