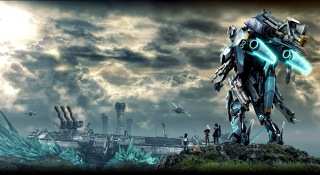 Survival of the fittest

Previously, all we knew about the story was that Earth had been destroyed and that the survivors were settling on a new planet, but now we have a better idea on what made humans leave the Earth, or should we say who?
We couldn’t gather the name of the invaders in question by watching the trailer, but we do know that they’ve followed humans to this new planet, and that they want to erase humanity from existence by destroying this new blossoming civilization.
The trailer also leads us to believe that the playable character won’t be the main character in the story, at least not the point where the trailer takes place. If you’re not fluent in Japanese, youtube user iYakku has released a version of the video with english subtitles.
You can watch the original Japanese trailer bellow: